It has been a month since the chaotic, nail biting whirlwind that was the 2016 World Series. It was the year of the underdog. The Cleveland Indians hadn’t won the title in 68 years and the Chicago Cubs topped that number at 108. But while most of America was watching the rivalry on the baseball field, another rivalry was brewing between two Chicago and Cleveland institutions.

The Art Institute of Chicago and the Cleveland Museum of Art capitalized on the World Series excitement by engaging in a social media battle where they each represented their city’s team. They digitally added their team’s fan gear, jerseys and other fun graphics to paintings from their collections and then posted the images to their social channels. The competition was friendly, creative and highly engaged with. 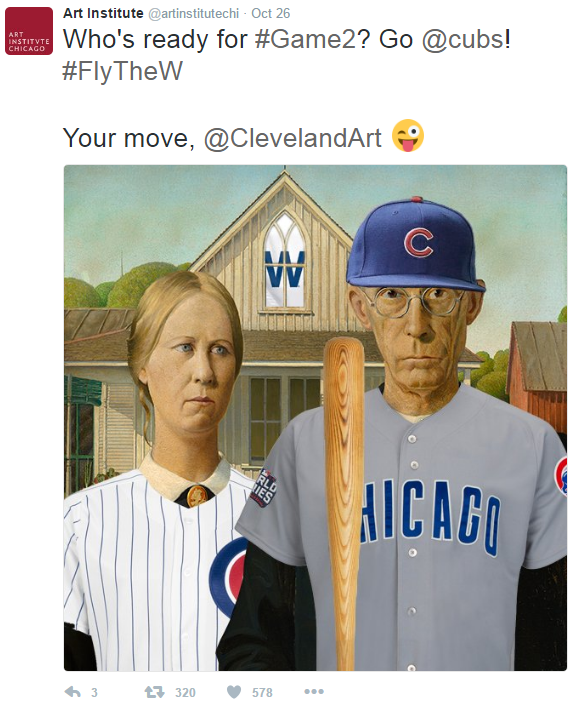 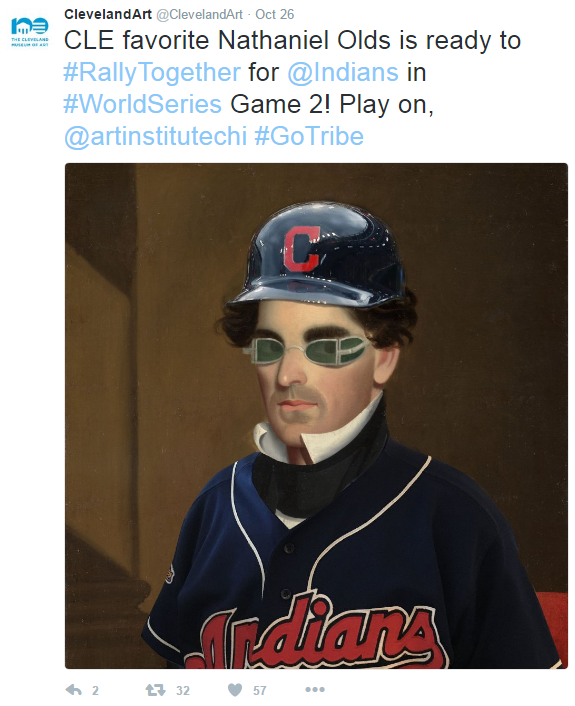 At Museum Revolution, we love to bring light to museums who are nimble and leading the way in creatively engaging new audiences. We interviewed Christopher Moore, Digital Communications Manager at the Cleveland Museum of Art to pick his brain on the rivalry.

Was there collaboration between the two art museums leading into the World Series?

Chris Moore (CM): Yes – the Art Institute of Chicago initiated the friendly competition leading into the World Series by tagging us on their social media accounts with an image of a piece in their collection photoshopped with Cubs gear. So, of course we wanted to respond and show our Cleveland Indians support and Cleveland pride.

What goal did you have in mind when executing this campaign?

CM: Our goal was to show our Cleveland pride, but also introduce pieces from the CMA collection to – potentially – an entire new audience. One that may not be familiar with the museum and our collection. 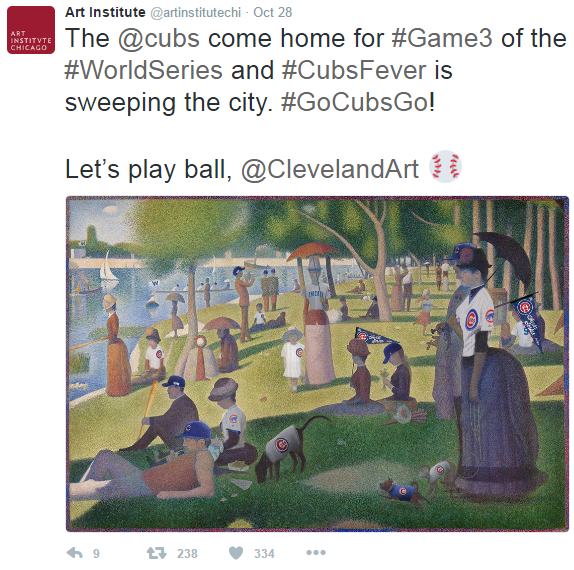 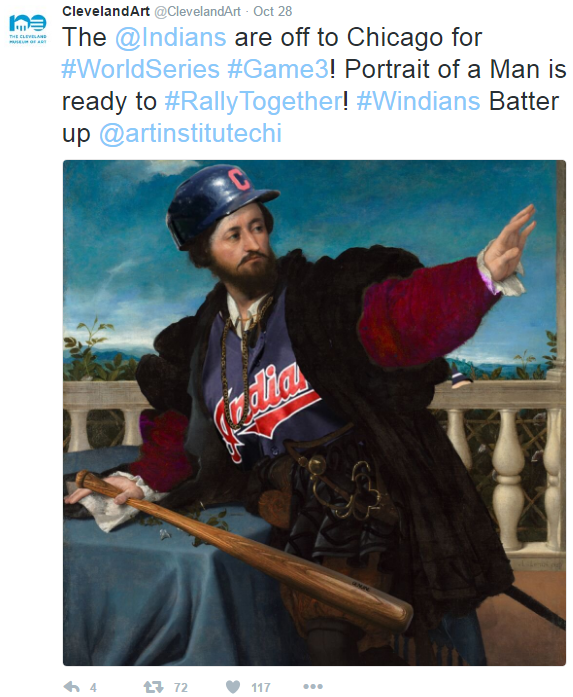 What type of social media lift and overall media attention did you receive?

CM: These posts received high levels of engagement from our followers and non-followers alike. We’ve even received comments from people saying they’d now like to visit the CMA next time they’re in town because of these posts. 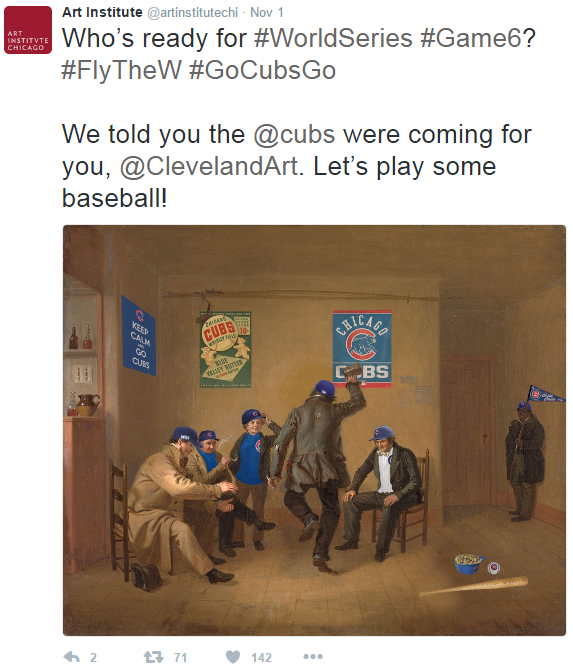 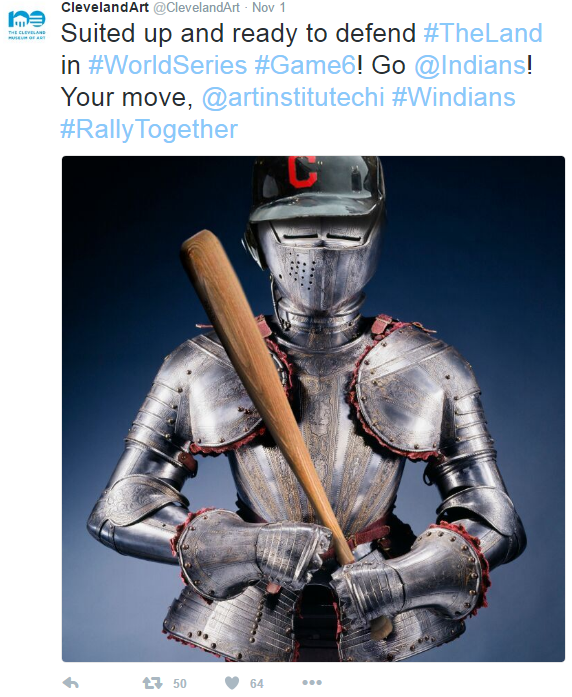 How does your team prepare to be responsive to current events on social media? Do you have any advice for other museums looking to follow your lead?

CM: We are always monitoring social media to see where and how we could fit into the conversation. Our advice would be to remain open to these types of opportunities and have fun with it. 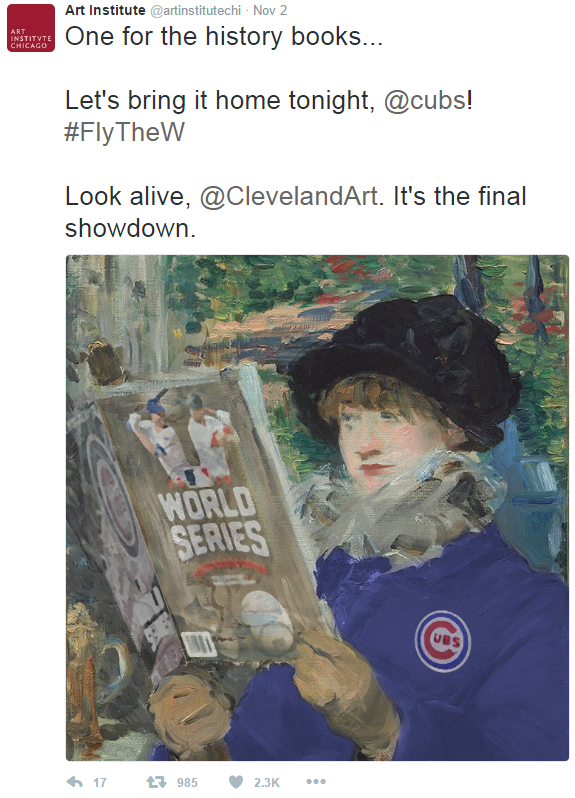 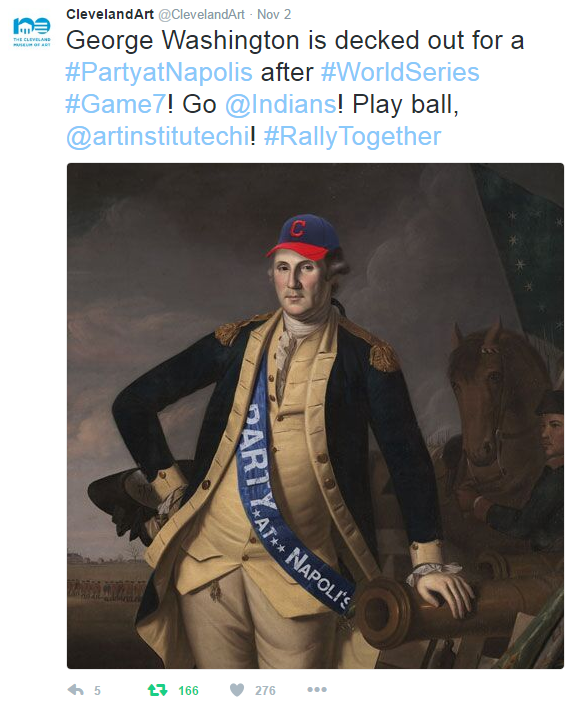 Even though the Cleveland Indians did not take home the coveted Commissioner’s Trophy, the Cleveland Museum of Art definitely gets a win for being swift and open-minded to opportunities to connect with audiences in the digital age.

Here are our 3 key takeaways:

1.       Capitalize on current events and trends. Don’t jump on every trend. Instead, see if you can find a way to authentically tie it to your mission and allow that to open doors to new audiences.
2.       Be responsive and join the conversation. Be ready to listen on social media and react to other museums and fans. After all, social media is about being “social.”
3.       Don’t be afraid to let your hair down. It’s important to bring personality to your content. People today are more likely to engage with organizations who they believe have a similar voice to theirs.